We are constantly looking for new ways to find oil such as rocks. Horizontal drilling helps produce oil by something called unconventional oil. By pumping in steam and pumping out oil , which pollutes our environment.

Nuclear energy is more powerful than any other energy source which makes it cheap. It makes up 20% of electricity in the U.S. The downside is that it is very expensive to build a plant.

In nuclear plants a chain reaction in the uranium causes it to heat up. The heat is then used to boil water and make steam which then turns a generator. Uranium has an energy density a million times higher than other sources.

Nuclear waste is stores at the reactor. We need to find a better solution to this. Breeder reactors could use the fuel more completely producing much less waste.

All energy has environmental impacts. The one that is most prevalent is Co2 Emissions. All fossil fuels when burned produce them. More than a third comes from oil. We have done a good job on keeping nuclear waste out of the environment but we can surely improve.
​
Oil starts out as plankton. When they die they sink to the bottom forming mud which is buried with layers and layers of sediment. It then gets heated and pressurized into crude oil. Tbis process takes about 10-100 million years. With oil we make propane , asphalt, polyester, plastics etc.

Coal is cheap because its very available and easy to mine, transport, store and turn into electricity. The biggest benefit is that it can help bring cities in need out of poverty. However,
mining coal is very dangerous and burning it produces pollutants. 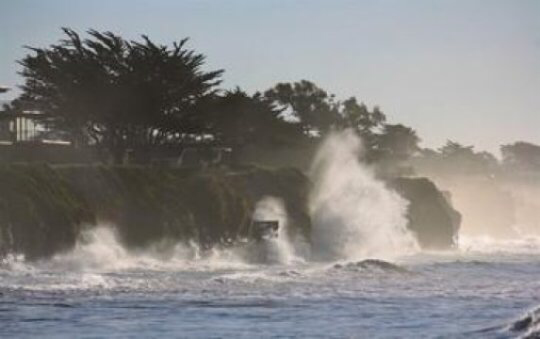 Scientists say that last winter El Niño may have felt weak to the people living in Southern California. However this is not the case, it was one of the most powerful weather events of the last 145 years. If El Niño events become more severe and common in the future, the California coast may become very vulnerable to coastal hazards of projected sea level rise. In a study by the University of California Santa Barbara, scientists found that during the 2015-2016 El Niño, beach erosion on the Pacific coast was 76% above normal. The study also found that "most beaches in California were eroded beyond historical extremes"(National Science Foundation).

This is an important issue because everyone should be aware of what storms may be causing. Just because we think it wasn't as bad it doesn't mean the storm didn't do any damage. Scientists should keep studying El Niño throughout the years and continue to gather information. 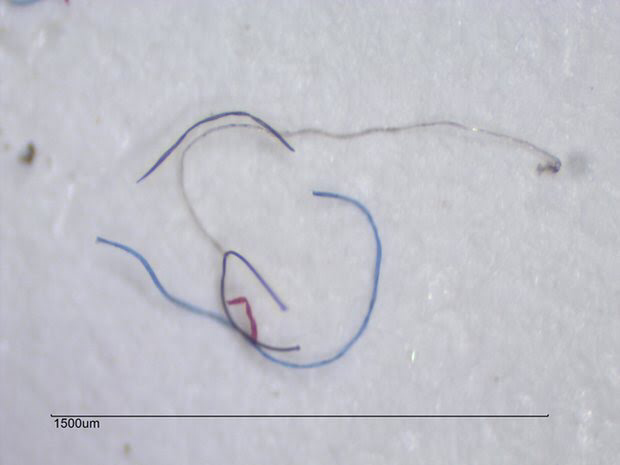 oo The professor Sherri Mason cut open a Great Lakes fish, she was shocked at what she found. Synthetic fibers were everywhere. They could be seen under a microscope. She had been studying aquatic pollution around the Great Lakes for several years. Mason, who works for the State University of New York Fredonia, had never seen anything like it. New studies indicate that the fibers in our clothes could be poisoning our water and food chain. Microfibers which are tiny threads shed from fabric have been found in abundance on shorelines where waste water is released. The University of California at Santa Barbara found that, synthetic fleece jackets release 1.7 grams of microfibers each wash. It also found that older jackets shed almost twice as many fibers as new jackets. Up to 40% of the microfibers travel to your local wastewater treatment plant which then enter lakes, rivers, and oceans.

​This is an important issue because synthetic microfibers are dangerous to our fishes and marine animals. The fibers’ size allows them to be easily consumed by fish and other wildlife. These plastic fibers have the potential to bioaccumulate and pass toxins into the body of larger animals. 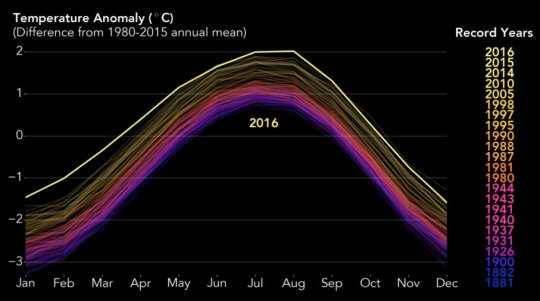 NASA and NOAA released that Earth's 2016 surface temperatures were the warmest since record keeping began in 1880. Th elanets average surface temperature has risen about 2.0 degrees Fahrenheit since the late 19th century (NASA). This change has been mainly because of increased Carbon Dioxide and other human made emissions into the atmosphere.This is extremely concerning because many people don't realize the harm we do to our Earth. There are many acts that help us protect our environment. For example the Clean Air Act, Endangered species Act, Safe drinking water act, Toxic stubstances act etc. These acts are passed for the safety of the people and environment. There should be more laws regarding polluting our air. Releasing greenhouse gasses into our atmosphere causes global warming. 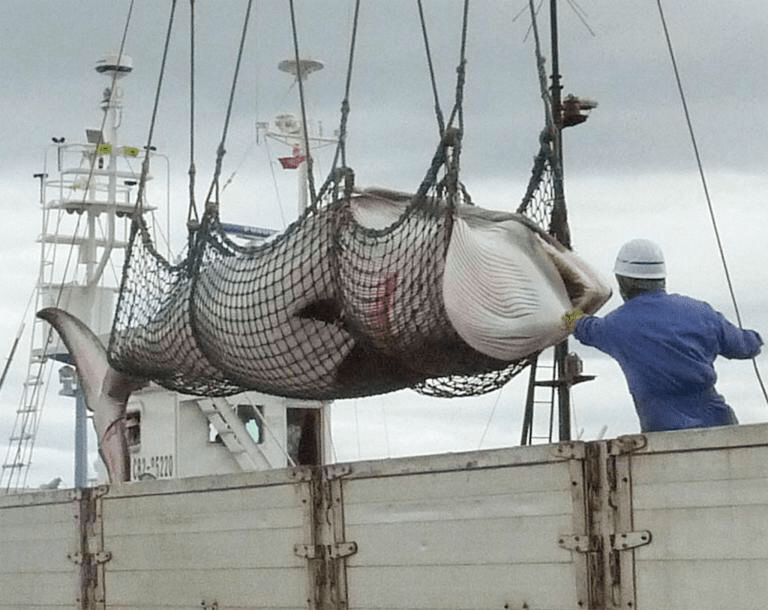 Japan has killed 333 Minke whales. This includes 200 pregnant females as part of the year's Antarctic whale hunt. The International Whaling Commission, which keeps track of the industry, has banned commercial whaling since 1986, but has made an exeption for scientific studies. Japan has been known to use this as a cover for commercial whaling activities. When a Japanese ship lands a whale, there is some part of it that goes to scientific activity. Such as collecting organs to use them in research. The bulk of the whale however goes to market, where it's sold for consumption.

Our wildlife are killed in order for us to make materialistic things out of their body parts. Its extremely depressing that many animals are on the endangered list because of, us, humans. There should be more organizations to spread awareness about these kind of situations.

The California Island foxes have been removed from the endangered species list. Not long ago these foxes were at risk of being extinct.Three subspecies of islands foxes have been removed from the roster of federally endangered species. This has been one of the fastest recovery of any mammal listed under the Endangered Species Act.There are only found in six of the eight Channel Islands where they have lived for thousands of years.

This is an important issue because we need to be aware of our animals. They are a great part of our environment. We should continue to have laws that prohibit the hunting and conservation of certain species. Biologists should continue to monitor the foxes and conduct health checks. 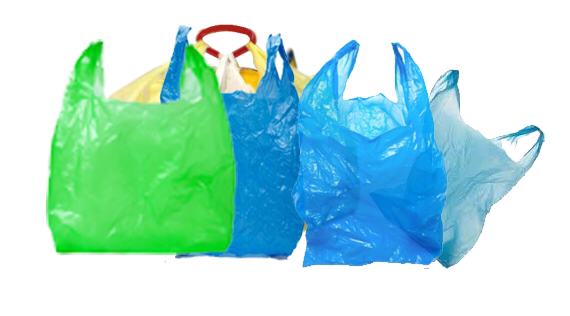 The California Plastic Bag Ban Veto Referendum, also known as Proposition 67, was approved on November 8, 2016. This is beneficial to us because it can reduce litter, protect our ocean, and wildlife, and reduce clean-up cost. No plastic bags will mean it will save our state tens of millions of dollars in litter clean-up costs. Many animals such as sea turtles, fish, and birds are tangled by plastic bags and some mistake them for food. 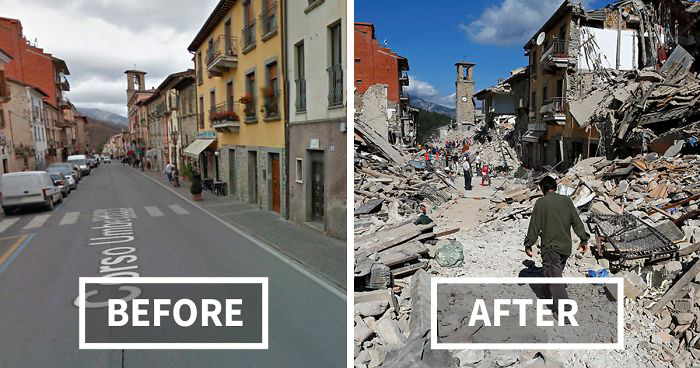 Italy had the most powerful earthquake in 36 years which was a disaster for the people (6.6 magnitude). It was at about 7:40am local time centered near Norcia, Italy. Aftershocks were reported as far as Venice. The earthquake destroyed many buildings and plenty of people evacuated.

The significance of this is that the effect of the earthquake causes the fault which run through Italy to move. They are moving at a speed of three millimeters per year. This can cause insecurities in the fault. This is an important issue because it is a tragedy that people are going through.

Caring for our rivers 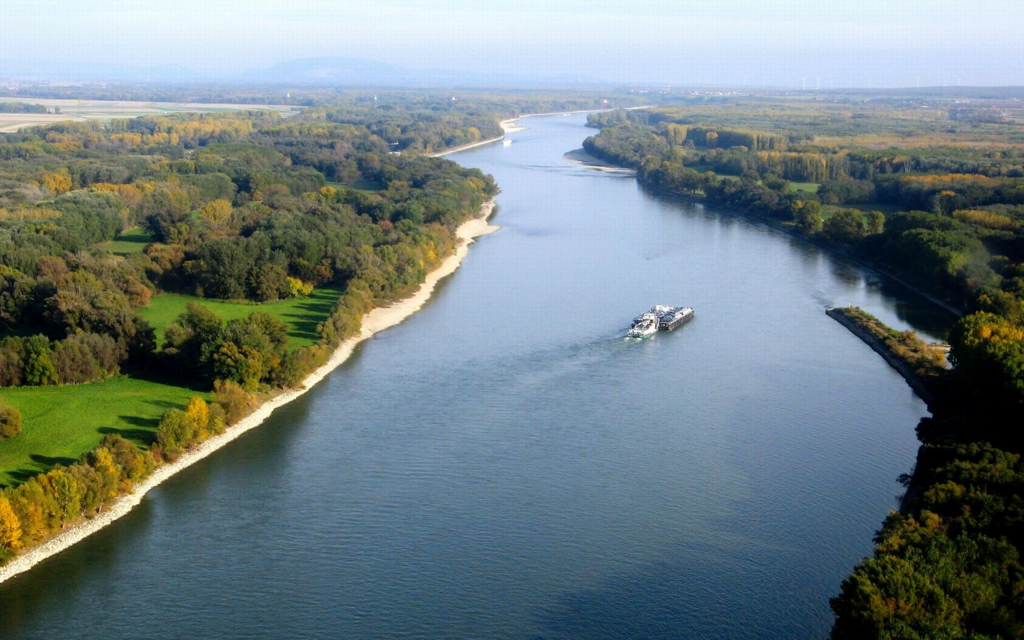 The San Joaquin River is the longest river in California. The lower part of it is fed by the flows of the Merced and Tuolumne river. California’s rivers work hard. On each tributary an abundant amount of salmon are born. However, their odds of survival has been decreasing. A draft proposal was released to update minimum flow standards to the lower part of the San Joaquin river.

This is an important issue because as humans we rely on our water especially if you live in the valley. Rivers irrigate crops, generate electricity and supply drinking water. They also support a commercial fishing industry. It is crucial that we take care of our rivers because it is the home of other aquatic animals as well.

One argument was submitted by NewYorkJ. Their argument was that humans are too insignificant to affect global climate. This is false because us humans produce greenhouse gases into the atmosphere causing global warming and other environmental issues. Our factories and our cars produce gasses that affect our air quality. Too much of this leads to warmer global climate.
Another argument was submitted by James Wight. He argues that Water Vapor is the most powerful greenhouse gas. This is false because 72% of Nitrogen dominates the Earth's atmosphere. 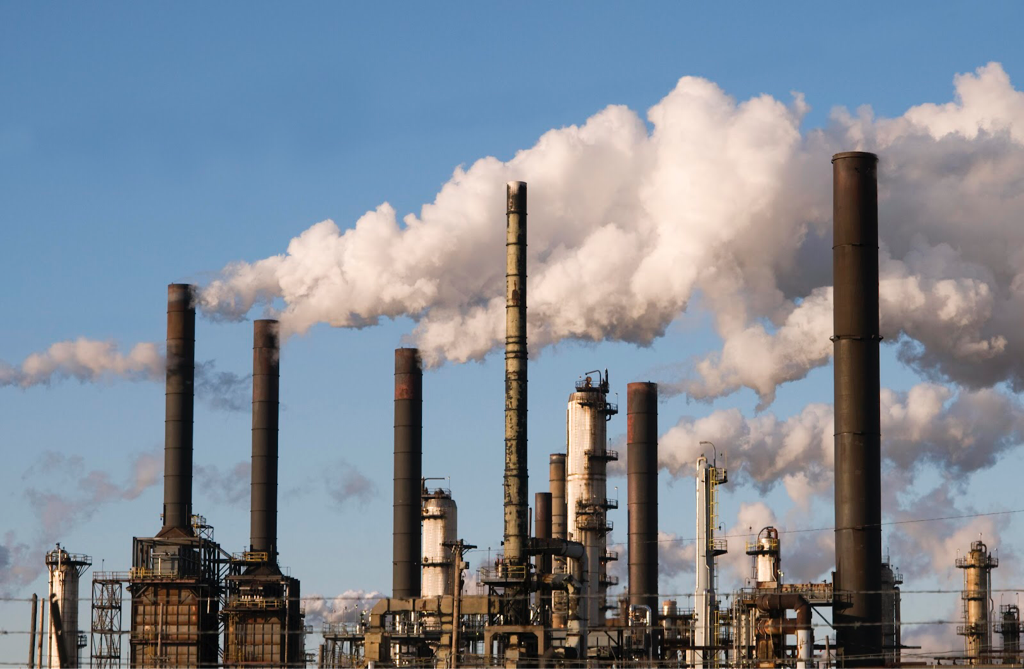 .
In Seattle, Washington there was a new ruled passed to limit greenhouse gas emissions from carbon polluters. This will cover power plants, oil refineries, fuel distributors and other industries. Supporters say that the state faces sever environmental issues such as rising sea levels, increased risk of drought, and wildfires.
I believe this issue is important because the air we breathe is critical to our health. We need to decrease the amount of greenhouse gasses that we are producing. This affects our atmosphere in many ways. By releasing greenhouse gasses our atmosphere is able to trap more heat which causes global warming. Global warming is a huge environmental issue currently and it will only be getting worse if we don't do something about it.
​http://www.modbee.com/news/business/article101968567.html

$900 million dollar for our environment 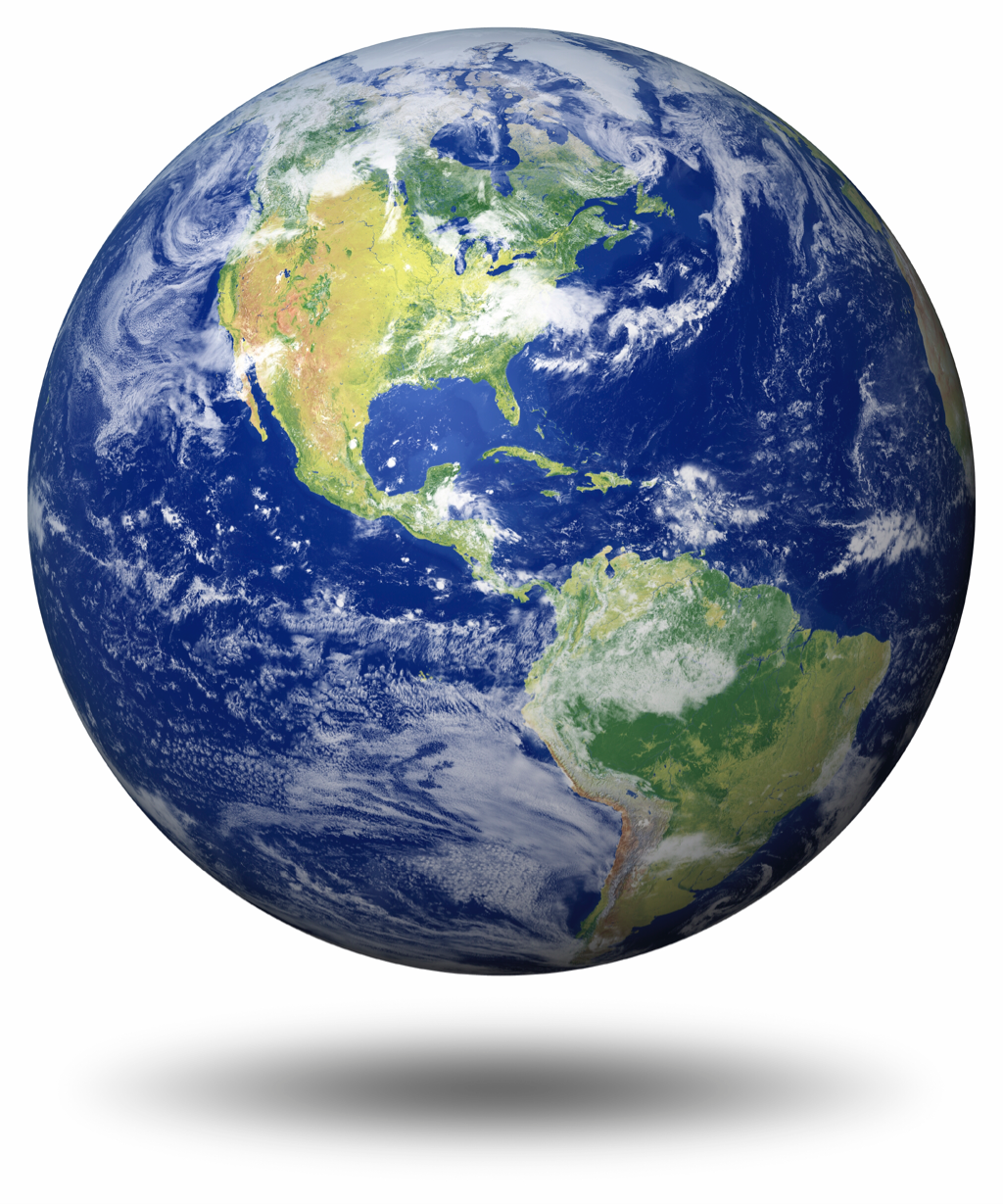 In Sacramento, California governor Jerry Brown unded $900 million dollars to for environmental programs. It is aimed toward cleaning up California's dirty air. The Plan was approved on August 31, 2016. The funding packages include $363 million to clean vehicle incentives, $95 million to plant more carbon-capturing plants in urban areas, and $135 million for transit and intercity rail construction. A grant program to promote energy efficiency will get $140 million.

This is is an important issue because we have done so much damage to our Earth. By having money to spare on environmental issues it can be a huge help. We can begin to build factories ot cars that will not pollute our air as much. This will also help clear up our polluted air which affects our health. This Plan will hopefully help raise awareness to our climate issue and more people will be inspired to help and make a difference. 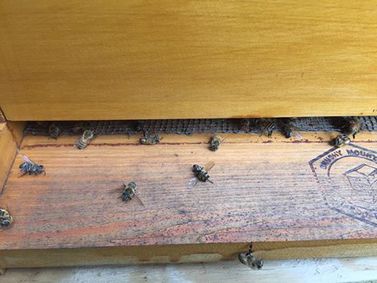 Millions of bees were killed after South Carolina sprays for Zika mosquito. The Zika virus they were trying to control is extremely dangerous. It is carried around by mosquitos. The symptoms most people experience are  ​mild fever, skin rashes, muscle and joint pain. The zika virus last 2-7 days. When the spraying occurred forty-six  hives died on the spot, and totaled to about 2.5 million bees. It was a tragedy that so many bees died during this process.
​   I believe this issue to be important because bees play a huge toll in our environment. Bees pollinate flowers which makes them grow. Without bees we will not have all the different types of flowers we have today. Almonds depend on a bee 100% for pollination. A great amount of our crops are pollinated by bees. If we don't have that then farmers won't have any crops to be grown which leads to us having no food. 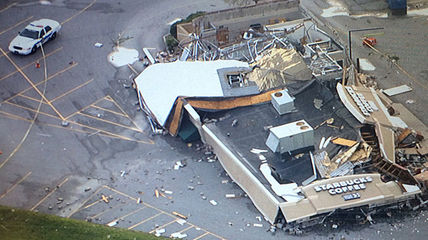 On Wednesday August 24, 2016 three tornadoes moved through the town of Kokomo, Indiana which is located north of Indianapolis. One tornado has been given a preliminary rating of EF-3. This means that the winds were as high as 165 mph. The tornado knocked over many trees and power lines. At least 29,000 electric customers were without power in Kokomo. There has not been any deaths or severe injuries reported across Indiana or Ohio. Numerous structures were damaged.
I find this issue important because we should be aware of what is going in other cities. Especially dealing with natural disasters. They are extremely dangerous and people around that area should take precautions. If people are not informed on what is going on it is difficult to stay safe.